Monday, Tuesday... What Day Is It?

Well... yesterday was the first day of the conference... and it was a little overwhelming, as these things always are.  It started out at 9:00 sharp with FIVE HOURS of my feminist research working group, which meant EIGHT presentations by crazy intimidating scholars from around the world.  And as I sat there listening to their research and feeling bad about the fact that I'm so ethnocentric to be writing about American theatre... something occurred to me: they're all writing about their own countries.  So just because mine happens to be all crazy and empire-esque doesn't mean I shouldn't write about what we're doing.  Right?  <shrug>  So I guess that was good.
Then, after five hours in the same non-air-conditioned room, I came out into the hallway to discover that the new scholars lunch workshop was in the same room.  So I grabbed my little brown bag lunch and sat right back down in that same stuffy room... but this time with more people.  By the end, I had been in that room for almost six and a half hours.  And I was on the verge of losing consciousness.
But I soldiered through and headed across the courtyard to the Teatre Lliure for our opening ceremony and our first keynote address.  The opening was basically a lot of talky-talk from a lot of mucky mucks.  We heard from the entire executive committee - most of whom were absolutely charming...especially the president!  So that's good to know.  And then we heard from the directors of the theatres that are cooperating with the conference... and this is when things started to get tough.  You see, this is an international organization, so it has two official languages: English and French.  So a couple of these theatre guys chose French instead of English.  And yeah... I definitely do not speak French.  And then some government guys came out and spoke some French... which I still did not speak.  It got a little rough there for a bit. 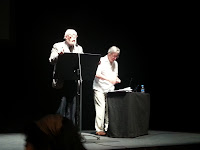 Then out came the adorable grandpa of theatre theory, Marvin Carlson, whose job it was to introduce our keynote speak Patrice Pavis - he made a name for himself as a rock star of semiotics.  Oh yeah.  His speech was LOOOOOONG and not particularly earth-shattering, but it was interesting, and it gave me some things to think about and some things to read, so that's good.  And I met a couple people, which was also good.  I'm such a terrible introvert...these things tend to be really difficult for me.
So one of my new conference buddies (a PhD student at University of Pittsburgh) and I grabbed some appetizers and then skedaddled.  I decided to take myself out to dinner at a restaurant down the street from my hotel.  I figured, when in Spain - order paella!  So I ordered the paella off of the vegetarian menu... but when it arrived, it had giant chunks of meat in it.  So I explained to the waiter that this was not, in fact, vegetarian. He argued that vegetable paella has chicken in it.  Umm... there are two separate items on the menu, buddy.  So he brought me new paella, which was okay... except I'm pretty sure it was prepared with some sort of meat broth, because I spent the rest of the night pretty uncomfortable in my hotel room.  And boy did I have a hard time sleeping.  But I'm pretty sure that's more about the nerves than about the animal products.

So, when my alarm went off in the morning, after about three hours of sleep... I snoozed 'til I couldn't snooze no more... and then I made the executive decision to skip this morning's keynote and go ahead and snooze a little more.  It was much needed, and I don't feel bad about missing a speech about opera, that I'm sure was fine... but... I don't really worry that much about opera.  So once I finally got up, I grabbed breakfast downstairs and headed to the conference where I went to a weird little panel called Cyborg and Second Life Theatre.  I ran into my German conference buddy there, and we were just not sure what to make of it.  The first paper was about a couple of performance artists who got a bunch of surgeries to look like each other - it was actually a very interesting and well researched piece.  Then the second presentation was a performance artist who basically just described a bunch of his shows... it went on for a very long time... and didn't really seem to go anywhere.  He's doing some interesting stuff, but I would say he's one of those folks who maybe shouldn't present on his own work.  After that I headed to a new scholars panel (featuring my U Pitt conference buddy) on Performance Politics: Identity, Rights, Freedom.  It was a good set of papers - all of them were very interesting.
At this point, it was time for lunch (at 2:00)... so I headed to the New Scholars reception.  Unfortunately there were a gazillion people there, but none of them were my conference buddies, so I grabbed some food, stood around awkwardly while I ate it, and then snuck out to go to the nap room.  Yes, lunch is also our siesta break, and they have set up a nap room for anyone to just pop in for a little snooze (the word of the day, apparently).  I took myself a little power nap and felt fresh as a daisy!  (Plus, I discovered that the conference has free espresso... which didn't hurt with that whole staying alert thing either.)
After Siesta I went to a panel on Constructing the Female Body (again with my German conference buddy).  The first paper didn't really tell us much, the second paper was interesting, but it was full of jargon and the guy talked really fast... but the third paper... oh man... quite impressive.  Her work centered around operating theatres and wax anatomy models from the 17th and 18th century.  They were creepy as heck, but it was a fascinating presentation by a very skillful presenter, so I had fun and learned a lot from her.  Then I sat in on another panel about Engaging Spectators' Complicity, but it really ended up not being my cup of tea, so I headed back to the hotel to drop off my bag before my first excursion on the Barcelona metro.  Yay, metro!
I found my way to La Seca - the theatre for this evening's performance, and let me just say, it was delightful!  It was The Magic Flute performed A CAPELLA by six people in just over an hour.  And of course, it was in Spanish (not Catalan... one of the reasons I chose this performance).  It was energetic and clever and just a really pleasant way to spend an evening (but for the lack of AC... which they had to turn off so the singers could hear each other.  Selfish).
By the end of the show, my head was a little swimmy from the heat, so I headed back to the hotel, grabbed some chips and candy out of a vending machine, a Heineken out of the honor bar (2 euros well spent), and settled in for the evening.
I'm intimidated by this whole thing, but I think I might also be inspired.  And I think I'm already exhausted enough for it to be Thursday.  But it's only Tuesday.  Woof.
Posted by Jen at 5:47 PM No comments:

Email ThisBlogThis!Share to TwitterShare to FacebookShare to Pinterest
Labels: Adventures in Academia

To be honest, I don't have much to post about yet.  I had my impossibly long feeling day of travel, complete with four hour layover in Paris.  I must have walked around the little F terminal a zillion times just trying to stay awake... which I did successfully... mostly.  I'm fairly certain there were a few Zs caught in good ol' CDG.  But I finally arrived in Spain, claimed my luggage and found a cab... which is when I realized my big problem: I am used to speaking Russian to people in these sort of cursory exchanges.  The endless string of "thank you" and "please" and "good morning" and "excuse me"...it's all a knee-jerk reaction now.  So I'm Russianing the heck out of all these poor Spaniards, when I actually have the skills to have a full on conversation in Spanish.  And yet, the first thing that always springs to mind is a good Спасибо or Нет.  Then, for whatever reason, random French and German words pop in, like they're jealous or something.  And I just sound like a crazy person...and I definitely don't sound like someone who can function in Spanish.  It's really too bad... it would be exciting on my first excursion to a Spanish-speaking country to involve a little Spanish speaking on my part.  But we'll see...the week is still young!

My first night in the hotel was rough.  The hotel's not great - it's not bad, but it certainly does not live up to its website.  So that was a bit of a disappointment.  And then, when the fire alarm went off around 9:30 (which was, of course, about 2 and a half hours after my jet-lagged hiney had gone to bed), I sat bolt upright and fumbled my way down the stairs to find out what was going on.  It turns out, the desk person had accidentally set off the fire alarm while she was trying to figure out why the entire building had lost electricity.  Awesome.  So, I managed to fall asleep again, and the AC was working again by the time I woke up at 2:00 in the morning, so that's something.  So I sat up reading for a bit before falling back to sleep and sleeping really well, so I think I'm pretty much on Spanish Standard Time now.  Huzzah!

Today was a pretty full day.  I got up for some hotel breakfast, did some more reading, then headed down to find the Institut de Teatre so I could check in for the conference.  Then I walked back up to the hotel, grabbed a light lunch, and walked over to the Hard Rock Cafe in the Plaça de Catalunya, where I was to meet up with our tour group for a tour of the old part of the city.  It took some time to find the group, but eventually we managed to gather, and we headed out for a three hour tour (a three hour tour!).  We saw so many sights and wound around through so many little side streets, I would find the path entirely impossible to replicate, but we sure saw a lot.  I want to head back down to that area some time this week for a little gift shopping.  We'll see if that's in the cards.  I would really hate it if all my family gifts had to come from the shops at the airport.  But it's going to be a busy week... so we'll have to see how strong the shopping force is with me.  I chatted with a few people on the tour, but it's always so awkward at these things.  There was one young woman from Munich who I spent most of the day with, so hopefully I'll run into her again.

After the tour I walked back to the hotel (since I won't be doing much running this week, I'm taking every opportunity to walk instead of take the metro... so go me!), grabbed some dinner on the way, and just settled in for the night.  Tomorrow things get started in earnest... Right at 9:00 we dive into the first working group meeting.  <gulp>