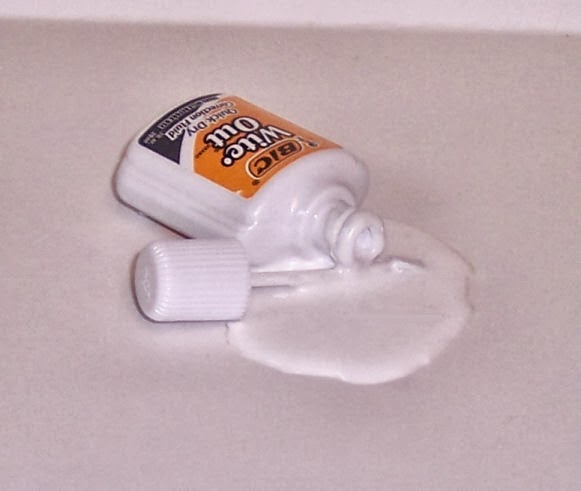 Have you ever driven through a white out?  I haven't... until today.  I have definitely driven in some pretty crappy weather.  I have white-knuckled it past spun-out cars, crawling along between all-too-sparse street lights and making bargains with all kinds of deities to get where I'm going.  But I'll tell ya... all of that became a pleasant memory today when I got stuck driving through white out conditions.  I landed in Sioux Falls, SD around 2:00, and it was a beautiful day.  Sure, it was cold and windy, but it was sunny and clear, and the roads were completely dry - a great day for a drive.  I got a few miles into Minnesota and saw something strange ahead of me - it was sort of like a wall of snow, but there weren't any clouds in the sky per se.  I figured I was just driving into some snow, but then I discovered something new.  I wasn't just driving into the snow, I was swallowed by it.  Inside this cloud, there was nothing.  There was just me, and about two yellow lines in front of me if I was lucky.  I couldn't see ahead or behind or to the side... I just had me.  For a while, I also had the person behind me.  We trailed along at 15-20 miles per hour for about 20 miles, at times I could barely see his headlights, but knowing he was there made me feel a little less alive.  There's pretty much a whole lot of nothing out here anyway, and it felt extra lonely as I was enveloped in swirly grey and white - no sign of humanity on any side.  I was getting to a point where I was actually considering pulling into the next farm house I saw and begging for help.  Luckily, I came upon a gas station in the teensy weensy town of Jasper, where I pulled off to have a little panic attack.  When I got there there was the guy behind the counter, and two large old me hanging out at a tiny little booth at the front of the store.  They chatted with me for a while, I called folks to try to decide what to do, and eventually, I made the extremely scary decision to get back on the road - trying to make it to the slightly less teensy weensy town of Pipestone, where there was a hotel.  This last twelve miles of the drive turned out to be the weirdest of the entire drive.  Sometimes the road cleared enough for me to speed up a bit, but then it would swoop in around me again, so I mostly just rode the rumble strip in the shoulder of the road and gave myself an ongoing manic pep talk.  But the weirdest part was that, for most of this part of the drive, I could actually see blue sky.  I could see the clear blue sky, but I couldn't see the road in front of me.  And when I finally got to Pipestone (named, because this area was the source for the stone used in Native American pipes back in the day), I took a moment to look around.  The air had cleared a bit, so I could see where I sat in relation to the rest of the storm.  As I looked out to the horizon, I saw billowing clouds on most sides, but they were billowing from the ground, not from the sky.  Mostly the snow wasn't falling, it was just being blown around, and it made it look like the ground was spewing forth all manner of hell.  It kind of reminded me of photos of the Dust Bowl... or like that ridiculous sand storm scene in the last Mission Impossible movie.  I can't explain it.  It was horrifying and stressful and scary and alone, and when I got to the hotel, all I wanted to do was just fall down off my shaky knees and weep for a bit, but as I walked into the lobby, I discovered that a middle school basketball team and their parents had made the same stop I had - and they all had to check in before I did.  I and the two other lone travelers beside me stood there for 30 minutes, waiting for all of these people to check in, and silently praying to ourselves that there would be a room for us once we got to the front.  Luckily, there was, so I retired to my new room and proceeded to call parents and boyfriend again - this time without the hyperventilating and weeping while leaning up against a Land O Lakes cooler in the back corner of a gas station.  When I think about it, the white out is a pretty fascinating and weirdly beautiful phenomenon, but it's one that I would be happy not to experience ever again.  EVER.
Posted by Jen at 10:43 PM No comments:

Email ThisBlogThis!Share to TwitterShare to FacebookShare to Pinterest
Labels: Straight Up Self Indulgence

Well, it seems that another year has ended, starting a whole new one, that will pass just as quickly as the last.  It's like it's a cycle or something.  And I'm looking ahead at a GIANT year.  So far I have a guest director slot at Southwest Minnesota State University (directing Dead Man's Cell Phone...again) in January and February (the best time to be in Minnesota, for sure); then I'm presenting two papers (that I also have to write) at the Mid-American Theatre Conference in Cleveland in March; this will be followed by presenting a paper at the Comparative Drama Conference in Baltimore in April; then I'll be back to Moscow for one last June; July has Brian's friend's wedding in California and my friend's wedding in New York; then the final week has not one, but TWO conferences to which I have submitted proposals: one in Scottsdale, AZ and one in Warwick, England.  During all of this, I'm searching for jobs and writing my dissertation, which does need to be in pretty close to done state by, oh, let's say Halloween...maybe Thanksgiving.

I think I'm going to throw up.

But because things are moving so fast, and are going to be so overwhelmingly busy, I think I'm going to make an effort to keep better records of my thoughts and experiences as they zoom by at breakneck speed... which means I'm going to try to keep up with my blog a bit more. I used to really like blogging.  And maybe getting myself on a regular trajectory of writing here will help me in writing the 3-5 conference papers (so far) and that pesky dissertation.

So here we go.  Not so much a resolution as just a, "hey... here's something that might help my brain."