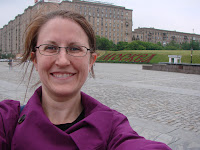 We don’t have classes on Sundays, but we usually do have shows to attend in the evenings, so they end up being only partial days off.  Today half of us were supposed to go see Richard III and the other half of us were supposed to go see Much Ado About Nothing.  I was in the Much Ado half.  However, it seems that some wires got crossed, and no one ended up getting us tickets for that particular show, which gave us an honest to goodness day off.  So my plan was to be the uber-tourist.  The fact that it was raining pretty heavily when I woke up put a bit of a damper on this plan, but I was not to be deterred.  After a little Starbucks interweb time, I made myself some lunch, put on my rain coat and headed out on an adventure.  I started out at the Храм Христа Спасителя (Cathedral of Christ the Saviour) – the largest Cathedral in Moscow.  It was originally built to commemorate the Russians’ victory over Napoleon, but then Stalin tore the magnificent building down with plans to build a giant statue of Lenin in its place.  Luckily that never happened.  Instead the site was the largest swimming pool in the world for many years.  Only in 1994 did they begin to rebuild the cathedral… finishing it in 1997.  So even though this particular building is only about 15 years old, it has the feeling and grandeur of a much older and more historical place.  I walked inside and was just overcome with the sheer beauty and scale of it.  It was not unlike the feeling I had walking into St. Peter’s Basilica ten years ago.  My eyes couldn’t open wide enough to take it all in.  I walked around and around in circles just staring in every direction.  I even bought a candle so I could go light it for my family at one of the many shrines in the building (It is Fathers’ Day after all… so I figured it was a good time to do it!).  By the time I was done in there the rain had mostly stopped.  So I decided to head to the Арбат (Arbat) – a pedestrian street with lots of stores and street artists.  On my way there I got off one stop too early from the metro and wandered around a really pretty park for a while before finally heading on to my destination.  There was nothing particularly fancy about the street itself.  There are a lot of tattoo parlors on the strip, which is sort of making me want to go get one.  We’ll see how brave I get.  Oddly, I have never heard the frickin’ theme song from Titanic as many times as I did on that strip.  I mainly steered clear of the gazillion souvenir shops, but when I did walk into one I was absolutely adopted by a sales girl.  She swooped down on me and wouldn’t leave me alone.  She was very sweet, but way pushy.  I ended up buying a couple of items for some family members and headed back down the street to the metro. Back at the metro, I hopped onto another line which took me out to what is known as “Victory Park” – a ginormous park dedicated to the Russian victory at the end of WWII.  There are fountains and monuments and floral arrangements everywhere.  There is a 142m tall Обелиск (obelisk) in the middle of the park – 1 cm per day of the war.  They even have their own Триумфальные Ворота (Triumphal Arch).  Apparently St. George is either Moscow or Russia’s patron saint, so he is all over that place.  I didn’t go into the Церковь св Георгия (Church of St. George), but I did take my picture in front of it.  So there’s that.  I wandered around the park for about an hour, bought a Magnum Bar (here it’s Магнат) that was just as delightful as I remembered them from my Austria days, and headed back to the dorm.  It was such a full day!  And since I was on my own, I ended up taking a ton of long-arm photos of myself at the various sites, since I was tired of just seeing the scenery… I wanted to be in the pictures too!  I’m sure I got plenty of stares, but I really don’t care.  I made the conscious decision that I was going to be the uber tourist today… and uber tourist I was!  I even bought my first bottle of vodka since I’ve been here.  I’ve been told this brand is extremely smooth, so I’m quite looking forward to giving it a try this week!  Go Boдka! PS - thoughts to myself during my solitary outing included: