June 12 – according to our tour guide last weekend and all the posters all over the streets of Moscow – is День России (Russia Day).  It’s like the 4th of July in the States.  It commemorates their first democratic elections… in 1991.  Yes, today is the 20thanniversary.  It’s a pretty big deal.  Apparently tonight in Red Square there will be fireworks and we think a Linkin Park concert… because nothing says Russia Civic Pride like Linkin Park.  Since Russia day falls on a Sunday, most of the city will be off work tomorrow, out in their little country villas (they’re called something else here… I think it’s дачас (dachas)… but I’m really not sure).  I hope that doesn’t mean our teachers will be grouchy about having to spend their Russia Day (observed) with all the dumb Americanskis. 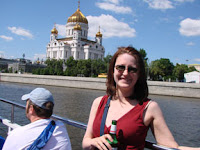