Well folks, mark it on your calendars.  Today will go down in infamy as the day when a large Russian man hooked both my ankles behind my head in front of 18 onlookers.  Yup.  We had movement this morning, and one of the things he attempts to get us to do is to put our feet behind our heads.  I am very nearly able to do this one leg at a time, so all of a sudden, as I was working on one leg, I felt Vladimir’s arms grab my other leg and pull it back behind my head… and there I was, in a pose he refers to as “Russian Dumpling.”  Do you think I should put that on my Curriculum Vitae? Nothing else for the rest of the day could really compare with how my day started, so I won’t bore you for long.  We had an hour of theatre history with Anatoly Smeliansky, during which he talked about the founding of the Moscow Art Theatre and their first production of The Seagull.  Then we had our Chekhov acting class which was okay, but we’ve had better days.  After a quick dinner, a few of us hang around to see a MXAT student production of selected scenes from Richard III.  It was a fine and energetic performance, though it was almost impossible to follow as it was not only in Russian, but cut all over the place, and Richard was split into two actors, and one of them was a small blonde woman.  But it was kinda cool to see some student work.
So… aside from my newfound flexibility… not a terribly eventful day.  So here’s a picture of an awesome Soviet statue from one of the metro stations. 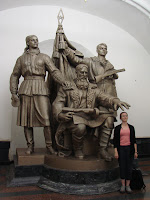