Well… Sunday night ten students and our MXAT liaison Nastya boarded a sleeper train bound for St. Petersburg.  The whole experience was a little bit weird – the tiny cabins, the tiny beds, the bunks.  We chatted for a little while, but mostly, we just slept.  I guess that’s what you do in a sleeper car.  I had the top bunk, which was an odd feeling.  For the most part, though, I slept pretty hard, and woke up around 6:00am just outside of St. Petersburg.  I got some tea in one of the nifty glass and sterling silver (or something) mugs that hearken back to the tsars, and we trundled off the train and onto a van which took us straight to a hotel (not ours) for a bitchin’ breakfast buffet.  After the buffet, we met our guide Olga to begin a bus tour.  At this point, I was feeling a bit on the delirious side.  What city are we in?  Why does my back hurt so much?  What the hell is going on!?!  Still, she led us around, showing us all kinds of sights.  We saw the fourth largest dome in the world (St. Isaac’s), we saw the burial place of the Tsars (Cathedral of Peter and Paul), we saw sphinxes along the river and a creepy statue of Peter the Great.  Unfortunately, she kept us driving for a bit too long near the end of the tour, so several of us fell asleep.  I felt bad about it later, but it was just physically impossible for me to keep my eyes open at that point.  After the tour we were dropped off at the hostel, which turned out to be a pretty good setup – I might venture to say it was the best hostel I’ve stayed in.  Of course, my last hostel experience was a little over 10 years ago… but still.  At this point, a small group of us headed out to explore.  We grabbed lunch at an Irish pub on our street called O’Hooligans and then we walked over to the Cathedral of Christ the Savior on the Spilled Blood.  A decommissioned Eastern Orthodox church, it was built on the site of the fatal attack on Alexander II.  On the outside, it is definitely a relative of St. Basil’s in Moscow.  On the inside, EVERY SINGLE INCH of wall and ceiling is covered in mosaic – embellishments, Bible stories, saints, icons… it was unreal.  We strolled down to the Kazan Cathedral after that which is still a fully operational Orthodox church complete with some really special icon at which there was a giant line of people waiting to pray.  We also tried to go to the Russian National Library, but they didn’t seem to allow people to enter without a library card, so we settled for taking pictures of the statue of Catherine the Great outside before heading back to the hostel for a nap.  After the nap we grabbed dinner at Café Romanov (so Russian… even though I ate vegetarian sushi) and then met up with the rest of the group at “A Traditional English Pub.”  For realsies.  A little before midnight (when it was still fairly bright outside, by the way – maybe it looked like about 5:30-6:00pm) we strolled down to the dock on one of the canals to buy tickets for an English language boat tour.  This ended up being one of the highlights of the city – everything was lit up so beautifully, we got to watch the bridges open for the night, and some guy flashed us from a bridge.  We weren’t allowed to stand up on the boat because some of the bridges under which we passed were so low that I could reach up and touch them from my seat.  That was a trip.  At 2:30 – when it still wasn’t completely night-like outside – we hit the pillow at the hostel… one full day. Tuesday morning we were up and at ‘em (and by “‘em” I mean the breakfast buffet at the hotel down the street again) before walking over to the Hermitage Museum.  The Hermitage was a little like Versailles and the Louvre all in the same place.  It was breathtaking.  And at the end of all the fancy rooms we were left to our own devices to wander around the rooms full of Renoirs, Monets, Picassos, etc.  At this point, Andrew, Greg and I went to lunch at an Italian restaurant with the intention of heading to a theatre museum afterwards, but upon consulting our guidebooks again, we realized that the theatre museum was closed on Tuesdays, so we started looking for something else to do.  I must admit, I considered not posting the decision we made, since my parents are reading the blog, but the fact is, it is an hilarious story for which I paid 100 rubles, so I’m going to tell it!  So, Andrew tentatively suggested that we attend an Erotica museum that he had found in his book.  Greg and I shrugged and agreed, so we walked for a while and ended up finding the address, but we couldn’t find the museum.  Then a toothless guy smoking on the corner said something about a museum and directed us around the corner and down a flight of stairs.  Now – the guidebook had said something about the museum being in the same building as a VD clinic, but we assumed that it had to be in an old one, or perhaps on a different floor.  This assumption turned out to be erroneous.  The museum and the VD clinic were one and the same.  When we walked in and inquired with the nurse behind the desk, she plopped a paper down on the counter welcoming us to Russia’s first erotica museum, giving us the price, and directing us to put on some protective booties over our shoes.  After we complied, she directed us down the hall… the “museum” turned out to be about two hallways worth of glass cases full of dirty little tchotchkes – lots of sexual positions and erections and stuff.  I was kinda hoping for some historical pieces a la In the Next Room, but there was none of that.  It was just someone’s dirty little collection.  The centerpiece of the collection, however, was a freestanding glass case with a jar inside.  This jar, they claimed, contained Rasputin’s penis.  Yup.  So, we looked at that for a little while, read the google translate English explaining their theories on how Rasputin might have been castrated (though not on how the result of that castration might have ended up in this creepy little VD clinic).  Oh, and PS – the clinic was fully operational.  We were not the only people in there, but we were definitely the only people not waiting to find out if we had Gonorrhea or something.  There were about 3-4 dudes sitting in there waiting for appointments or test results, and doctors and nurses came and went and interacted with them from time to time.  It was all kinds of surreal.  Then we went to a park across the street so that we could scrub that “museum” out of our brain.  That night the whole group grabbed dinner at a Georgian restaurant and then drinks back at the Irish pub for Greg’s birthday, and we turned in for the evening after another crazy day in Petersburg. 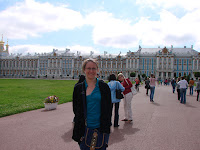 The third and final day began much the same way as the others – with a breakfast buffet.  Then we checked out of the hostel and loaded ourselves into a van that took us about an hour outside the city to Царское Село – the summer home of some of the tsars.  It turned out to be a little like a mini Versailles – in fact the rumor is that Elizabeth (a daughter of one of the tsars) was supposed to marry one of the Louises of France, but the marriage fell through so she decided to build a palace that would make Versailles look lame in comparison.  It was lovely, though ridiculously crowded.  That’s one thing we discovered about St. Petersburg – it’s much more of a touristy city than Moscow, so everywhere we went there were these enormous crowds.  And let me tell you, you learn a lot about people when they’re in a tour group.  French people will cut you if you get in the way of their seeing antique ceramics.  Once we wound our way through the house, we walked through the grounds and met back up with our bus, which took us to a mall in St. Petersburg where we grabbed lunch before hopping back on the train – this time it was a bullet train, so the trip that took eight hours on the way there took four hours on the way back.  On the train, there was some crazy Russian movie playing.  I tried to follow it with no sound, and I think I actually may have figured out some important elements about it, but overall, it seemed like a very strange movie.  When we got back to the dorms, some people were at a play, so I just ate and tried to get re-settled.  It ended up being a very drunk night for a lot of people, but I just had a beer with some of the grad students and had a perfectly lovely evening. So… that’s the nutshell version of my adventures in St. Petersburg.  My two main regrets from the trip are as follows: 1) I never managed to stop moving long enough to buy anything with “St. Petersburg” on it – even a keychain.  2) I didn’t get a chance to go to this vegetarian restaurant I read about called “Idiot.”  But hey… I guess that gives me a reason to come back?  Whatever the case, it was a fantastic trip that I wish could have been about a day longer.  Now, we’re really in the home stretch: Thursday, Friday, Saturday… then Sunday we fly home.  Yikes!
Posted by Jen at 3:06 AM