Monday I woke up in Greenville, Tuesday I woke up in Detroit, Wednesday I woke up on an airplane somewhere over Ireland, and this morning I woke up in Moscow.  We landed around 10:00 last night, when the sun was just beginning to set.  We waited in a massive line at passport control where the immigration officer stared at me wordlessly… seriously… this man didn’t even ask me a question.  He just bored holes in my skull.  By some strange miracle we all got our luggage and then we headed out to meet our liaison, a theatre management studio at the MXAT (Moscow Art Theatre) named Настия (Nastia – and I think I have the Cyrillic right).  She led us to a bus where she quickly made herself into our very favorite person in the world by supplying water and sandwiches.  She even had four vegetarian sandwiches for the four vegetarians – the first time that has happened.  The airline apparently never got the information that the study abroad asked us for in regards to vegetarians, so I’ve been eating a lot of bread.  Bonus: I can now say “bread” in Russian (хлеб [klyeb])
We got to the dorm where we learned that though we were supposed to be on the third floor, a bathroom ceiling had collapsed mere hours before, forcing us to move to the fifth floor.  And you guessed it – there’s no elevator.  So we dragged our suitcases up to the 5th floor where we discovered the move also meant that there were not as many single rooms as we had expected either.  I did manage to snag one for myself, which is a VERY good thing, what with my general disdain for other humans (sorry, fellow travelers!).  We met in the hallway to get schedules for the next day and then went about our business.  Some people went on a quick preliminary grocery run, but I stuck around, got a tour of the kitchen with the other person who stayed behind, and then took a much needed shower.
Sleeping was not as difficult as I expected.  It is really pretty hot, but if you open the window you end up with a decent draft, some street sounds and a few bugs (no screen… yeehah).   Plus, I was exhausted enough from travel that I managed a good night’s sleep and was fairly ready to face the day. 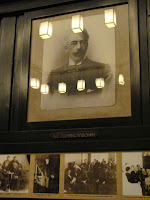 This morning we didn’t have to be anywhere until 10:00, so I was able to take my time in the morning.  I accompanied two of the boys to the Starbucks across the street where we discovered the difficulty of dealing with currency, and that Starbucks does not take American Express.  But I did prove my usefulness in my ability to read the menu.  We made the trek to the Moscow Art Theatre (MXAT) as a group – it’s about a 30 minute walk – and then walked up the five flights to the American Studio.  The guys who went last year said it, and I can now confirm: Moscow is made out of stairs.  We got a little chit chat about the rules and decorum of classes, went to exchange our money, and headed off to lunch at the MXAT cafeteria, which was delicious, affordable and a bit of a leap of faith.  All good things.  After lunch we began our training in earnest with an hour lecture on the history of the MXAT with the dean of the MXAT school, Анатоли Смэлиански (Anatoly Smeliansky).  The lecture took place in the foyer of the main theatre which is basically a museum to the greats of MXAT past.  Each person has his/her photo, name, and four photos of different roles s/he played.  It was awe-inspiring and humbling to be sitting there in that room with those faces staring down at us – Stanislavksy, Nemirovich-Danchenko, Dostoyevsky, Meyerhold, Chekhov – gulp.  The lobby was a little warm, and jet lag has by no means become a thing of the past, so staying awake was a bit of a struggle, but I wanted to hear every word he had to say, so the struggle was well worth it!  After his lecture, we were led back up to the studio where we met Миша Лобанов (Mischa Lobanov), for a two hour class on Michael Chekhov technique.  This man is a human beam of sunshine.  The pure joy in his eyes and the sheer excitement in every detail of class was enthralling!  He taught through an interpreter, which is definitely going to take some getting used to – learning how to listen to two people at once.  We did a series of exercises that dealt with tempo/rhythm and imagination.  The exercises are extremely simple, and won’t be terribly exciting if I detail them here, and I can only scrape the surface of Mischa’s warmth and impish delight.  Suffice it to say – I couldn’t stop leaning forward.  It was amazing! 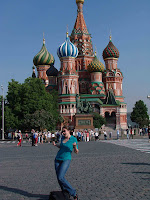 After class, we split up.  Oooh.  Half of the group is attending a production of The Seagull performed by a company run by one of the MXAT members who also happens to be one of the most famous actors in Russia – Олег Табаков (Oleg Tabakov), while my half will be going to see the same show tomorrow night.  So, a handful of us non-Seagull-types decided to hoof it the two blocks from our studio to Red Square.  Yup, two blocks and we’re at the Kremlin, St. Basil’s… it’s breathtaking.  As sparse as so many things in Russia can be, the absolute splendor of Red Square is really something.
Now, on one side of Red Square is the entrance, on one side is St. Basil’s and on one side is the Kremlin.  I know, I can hear you geometry minded folks all the way from the US chanting angrily: “But a square has FOUR sides, red or no!”  And you would be right.  The fourth side of the square is the Гум (goom) – the largest Mall in Moscow.  It runs the whole length of Red Square, so we decided we would go ahead and walk the massive mall on the way back.  ­­­­­­The ice cream we bought in the middle was a big hit.  And then we hoofed it all the way back to the dorms.  Now, it is unseasonably hot here in Moscow, and the 7:00 sun feels an awful lot like high noon anywhere else.  So that uphill walk back to the dorms sure felt like it took a while.  And though I haven’t even considered what to do for dinner yet, I will say that I’m considering the day fairly over… and it’s been a little bit on the full side.
Posted by Jen at 12:43 PM