I know what you’re thinking, but while I AM talking about Anton Chekhov, I’m not talking about the Konstantin you might expect.  But I’ll get to that later.

This morning I got up to skype with the fam (skype has not been good to me this trip… I’m kinda grouchy about it) and then I met up with part of our group and all of the group from Butler to head out to the country to Melikhovo – Chekhov’s estate.  We hadn’t received much info about the trip, and none of the professors were coming, and no one from the MXAT was coming, so I became the defacto leader for the day.  I went to the bus and introduced myself (in Russian) to the tour guide, got the group loaded up, and off we went!  It was a two hour drive there, a two hour tour, and a two hour drive back… so it was a pretty long day.  When we got there, we met up with another guide who only spoke Russian, and our tour guide from the bus translated for her, though it was clear that there were many moments when she wasn’t quite sure how to translate what was being said, so she would just sort of skip things.  I could understand well enough to know that she was skipping – but not always well enough to know WHAT she was skipping.  Still, we walked through Chekhov’s clinic (remember, he was a doctor before he was a writer – and continued to practice as a doctor his whole (way too short) life), we walked through the reconstruction of his house, we saw the grounds, the theatre on the grounds, the summer theatre in the back yard, the little house where he wrote The Seagull and Uncle Vanya, and even the pond that inspired the scene in The Seagull where Treplev’s play is performed.  I’ll admit, the tour was slow going and it was hard listening to the muddy translation, but I actually found the tour to be very enlightening about the kind of life Chekhov lived – and therefore on the kind of lives his characters lived.  I could see those characters existing in this setting, and I really love having that in my memory banks (even if not everyone in the group was particularly interested in the outing). 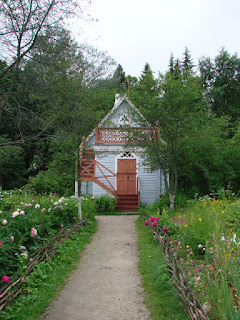 We headed back into town and had a couple of hours before heading down to the MXAT to visit my Russian boyfriend – Konstantin Khabensky – in Three Penny Opera.  This is a totally rockin’, but almost four hour long production of Brechty goodness… and it was as awesome as I remembered it.  A few things had changed, which was interesting to see, but overall it was still creative and energetic and sexy and weird, and I was so jazzed to get to see it again - giant skeleton puppet and all!  And it’s the first thing I’ve seen my Russian boyfriend in this summer… so I know he was missing me.
Posted by Jen at 4:39 PM