Well, today was our last day in Moscow.  Weird.  We got up bright and early and headed over to Novodevichy Cemetery to visit the graves of Stanislavsky, Chekhov, Nemirovich-Danchenko, and a number of other important folks.  The Russian students who graduate from the MXAT also make this trek at the end of their studies, and it is a very moving way to spend a morning.

From there, we did the opposite of something moving – which was we went to a giant flea market and bought souvenirs for four-ish hours.  I’m not sure I’m super pleased with my gift-buying prowess this time around, but it was fun to be in there and be familiar with the territory.  I even bought from a few of the same people I bought from last year, so that was kinda fun.

Once we were done emptying our wallets, we headed back to the dorm where I wolfed down some pasta and led six of us back to the Сатирикон for our final show of the month: Чайка (The Seagull).  It’s an impossible show to describe, but I will say that it is the shortest four and a half hours of your life.  It is a stunning, imaginative, exciting, brilliant take on a classic that these actors and these audiences know so well.  And even though we couldn’t understand the actual words that were being spoken, we were all help in rapturous attention.   I wept – all out sobbed – for the last 20 minutes or so of the play – it was so beautiful.  A girl stopped us after the show - since we are clearly American - and asked us if we understood the show.  It's one of those crazy things about seeing shows over here - they are generally so clear and communicative, that we can be moved without understanding a word - the Russians don't always believe us, but it's true.  I really wish there were something I could say to do this show justice in blog form… but there really is nothing. 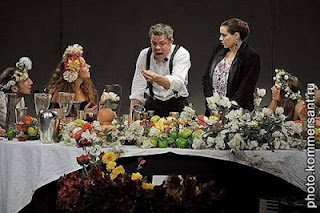 Then we headed back through the metro – our last trip on the metro for the month (including what I assume will be my last time for a while giving directions in Russian to a Russian…booyah) and back to the dorm where the packing began.  It’s now almost 3:00 in the morning… the bus will be here in about 3 and a half hours… and the packing continues.  As you can tell from the fact that I’m currently posting a blog, I am totally on top of this packing thing.