Going out with a BANG

Today was a hot hot hot hot day.  We started out with a little trip to Novodevichy Cemetery where Stanislavsky, Nemirovich-Danchenko, Chekhov, and Olga Knipper Chekhova are buried, among other Russian luminaries.  I always make sure to buy a flower for good ol’ Olga too – I feel like she gets forgotten.  I probably should have grabbed a flower for Lilina – Stanislavsky’s wife – too, but I think I already made the woman at the flower shop crazy paying for the flowers with the tiniest change.  But I used up almost all of my change! 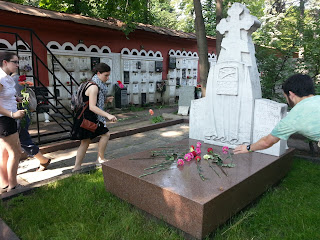 After that, we jumped back on the metro and headed to Ismaelovo Park – the giant market where one can find every Russian souvenir that has ever souvenired in the history of souvenirs.  I wasn’t able to find a ring to replace the ring I bought last year (it broke… sadness), so I actually spent no money at this giant flea market.  It felt wrong… and also a little liberating. 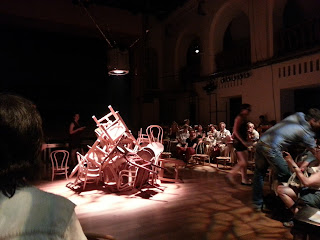 After the park we metroed it back to the dorm for a little bit of time to ourselves before heading out to an earth shattering final performance of the month – an invited audience preview of Dmitry Krymov’s new piece based on Chekhov’s Three Sisters.  Yes... we were seeing this in its "not quite ready for primetime" state - a new work by one of the most exciting directors working in Russia (possibly the world) today.  It was a devastating, fascinating, hilarious, amazing evening of theatre.  When we walked into the space there were chairs in a pile in the middle, and it wasn’t until all those chairs had been un-stacked and placed in the round around that space that the show was ready to begin.  And boy did it begin!  They started out with a procession carrying a dead body (which they quickly chucked offstage), and just took off from there.  All of the actors were grotesque in some way – with fake noses, fake fingers, hunched backs, weird hair…it was a bizarre world of Three Sisters, and it was immediately fascinating.  Chebutykin’s entrance was positively terrifying – he was a huge, spherical beast of a man, and he was covered in blood.  I can’t even begin to describe all the astounding images they used in this production.  Whether it was three-armed Chekhov, or pregnant Andrei and constantly breast-feeding Natasha, or magical moving teacups, or magical teacups that burst into flames or crazy family tree projections, or Protopopov creepily watching over everyone, or Marlene Dietrich, or a brilliant cameo by a live rooster, or Tuzenbach engaging Masha in a chicken dance, or Chebutykin obliterating their mother’s clock, or a very strange number of dead birds for this not being a production of The Seagull…there was just too much happening...and in the most amazing, inspiring, soul-crushing way possible.  It was all too brilliant and too beautiful.  And then, when the actors all sat in a circle removing their grotesque makeup but somehow still being the characters too, I started to cry.  And I kept crying for the last 20 minutes of the show.  And when Tuzenbach entered with his coffee, I thought everything was going to be okay… but it wasn’t… and I wept as Irina danced with his lifeless body… and then when the cast held him over their heads and walked him offstage just as they had walked the body on at the top of the show, I lost my frickin’ mind!  It was such an intimate and artistically expansive production… I couldn’t even contain myself.  And after the show, Dmitry Krymov came out, greeted us, signed the giraffe patterned scarf of a student who has a grant to study his work, and took a group picture with us.  It was maybe a perfect evening.
After we all stumbled home – completely intoxicated from the theatre we had just witnessed, we had our final pot luck, then disbursed for some poster distribution, beer drinking and general bonding and frivolity.  The group even presented me with a little gift they had gotten me – a set of CCCP shot glasses.  I was already so emotionally frail at that point, I’m surprised I didn’t just burst into tears right then and there.  It was just really sweet.  I love this group!  (And if any members of my prior groups happen to be among the seven and a half people who read this blog, I love you too… well… most of you anyway…)
Posted by Jen at 5:58 PM