Vanya and Juliet and Coriolanus, oh my!

Well… I let this week get away from me blog wise!  Yeesh!  So the seven and a half of you who read this, go ahead and buckle up for another long one!

Tuesday was a strange day because, in the midst of all these lasts, we had a first – our first stage combat class.  I would tell you our teacher’s name, but it was the first thing he said to us and we hadn’t yet adjusted to his accent, so none of us caught it.  It’s maybe Vladislav or Slava or Stanislas… or possibly Jim.  Who knows.  Whatever the case, he is a bear of a man who took us through a master class.  It might be both a good and bad thing that we get to the end the month punching each other.  But either way, it sure is a fun thing.

After combat we grabbed lunch and headed back for acting…sort of.  We did the group etudes (I had a little cameo as one of our acting teachers.  Once he realized that I was being him he could hardly contain himself…and then apparently he made fun of my accent.).  But after the etudes, the PhDs went off to meet with Sergei to talk about teaching acting while the rest of the group continued working with Ilja.  Then we all came together at the end of the class for more Chekhov etudes.  I think mine was pretty successful… so that was a nice way to sort of end that part of the month for myself. 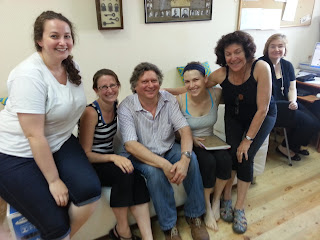 After class we headed back to the Satirikon for a little-known play called Romeo and Juliet which just opened this month.  It was featuring a lot of students from the MXAT, so it was cool to see them again.  And the production was very interesting.  First of all, it was set in a half pipe/skate park/amusement park that may well have been on the moon… so that was a little strange.  But in general, it provided a great setting for the onslaught of young and dumb that was to be the three hours’ traffic of their stage.  The actors who played Romeo and Juliet were positively delightful – the energy of their experiences of each other was so manic – it really made them feel like crazy, hormone driven kids rather than the high-minded lovers that so many productions try to transform them into.  They were positively acrobatic in their expression of love for each other, and as one of the MFAs pointed out, Friar Lawrence had a hard time keeping them from making out long enough to marry them.  I really liked that interpretation.  Now, I wasn’t as keen on the giant clown face projections or the roller coaster on which Capulet came and went (and that Mercutio rode into oblivion after his 4 hour death scene), but the death scene at the end was well worth the price of admission.  It was really lovely.  And aside from the giant bolt of lightning that struck to end the fighting over their bodies (it was all my row could do not to laugh out loud at the clichéd moment), it had a really nice ending.  I learned a lot about the play from this production and really actually cared about these dumbass kids for one of the first times ever.

Wednesday started out with our final morning of Russian Folk Dance… but our translator didn’t show up.  So poor Irina was on her own with our uncoordinated selves.  I did manage to translate some of her instructions to help with the flow of the class, so I was feeling pretty useful from a language perspective if not from a getting my feet to do what they’re told perspective.  Then it was off to singing for our final “recital” for each other.  I always love this class, since we’re pretty much separate for the whole month of singing, so it’s a cool chance to get to see what everyone else has been working on. 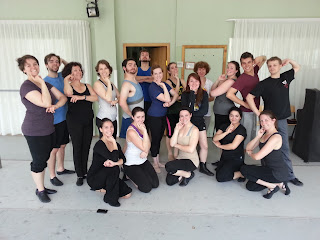 After lunch we met up for our final acting class, presented our etudes, talked about the month, and a few people stood up and taught some exercises, which were mostly a lot of fun and great for the ensemble.  Then we did our last few Chekhov etudes and headed out – half home, and half of us to the Arbat where we grabbed Blinis for dinner (oh, Teremok, how I’ve missed you!) and saw Uncle Vanya at the Vakhtangov Theatre.  It is a very artistic and important production that has won lots of awards, but it’s not a very joyful production.  That’s one thing I find over here – even in the most dire of plays, you still feel the joy of the performances.  Not in this one, quite so much though.  Still, there are some beautiful images in the show, and it caps off our collection of all of the four major Chekhov plays.  Go team! 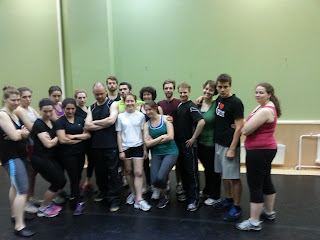 Thursday morning started off with our second and final stage combat class wherein we did a good deal of punching and kicking each other in the face, with a few head butts thrown in for good measure.  Then we gathered for our last theatre history lecture before a little reception to celebrate the month.  The afternoon was pretty much ours, so several people went out touristing, though I went back to the dorm with every intention of getting some work done.  Of course, Moscow is in the midst of a heat wave the last couple of days, so the walk home was unendurable, so I just took a shower and fell asleep until it was time to get ready for the theatre.  So the group met up and headed off to the Satirikon for King Lear, but since I’ve seen it twice, I decided to go to the School of Dramatic Arts for a production of Coriolanus.  And let me tell you who had a better night at the theatre: the rest of my group did.  This Coriolanus was amazingly unskilled and choppy.  All the lightness and grace I’ve become so accustomed to in the actors here was utterly lacking.  There were some creative moments of staging, but by and large it was a play about people yelling, uncoordinated interpretive dance, and more doors than a French farce.  Coriolanus flew around, hanging five stories up only by his arm - no harness.  The body stockings flattered no one.  The two minutes devoted to getting one of the conspirators into his scrubs was painful...and watching the two of them crawl  out of the pit...well... I wasn't sure either was actually fit enough to make it.  Oh... and there was the actress who looked like Samantha Bee... but seemed like Samantha Bee putting on the act of being in a really earnest but thoroughly sub-par production.  And boy, did they abuse the elevator in the space.  I was sitting there through the second act begging them to kill Coriolanus already.  I’m glad I saw it so that I don’t have to wonder… but damn… it was rough.


Then it was back to the dorm for some sleep… in the hot hot hot hot dorms.  I think Moscow is getting hot to try to make it easier for us to leave this land of so little air conditioning.
Posted by Jen at 4:46 PM