I am the Goldfish, Goo Goo ga Joob.

This morning , about half way to class, we got a pretty substantial downpour going... so most of us were pretty drenched by the time we got to film history.  I was particularly grateful for my umbrella today, since I had to stand outside the building to usher people in, since this class is not in our usual building.  As we wound our way into the classroom, we passed dozens of nervous young Russian actors who are here for their callbacks to the Moscow Art Theatre School.

Галина (Galina) is as delightful as ever, and it was a lot of fun to get a refresher on Russian history, and to watch some of these little film snippets again, with an even deeper understanding of their place in history.  I can’t remember if I posted this link last year, but who cares… I’m posting it now/again: The Cameraman’s Revenge is so much awesome, I can’t even begin to explain it!

After our lecture we had lunch before hitting acting class with some successful etudes and intense training games.  Each day we’re working harder and harder, gaining a lot of headway, I think.  We’re on animals already, so we had a bird and a slug and a swan and a giraffe… and I was a goldfish.  There are always so many details that we think through, and then so many details that we have the “I should have thought of that” moment during our feedback… and then the delicious moments of “wow, I never would have thought of that.  The level of feedback on our exercises is so in-depth and insightful… every little encounter teaches us so much! 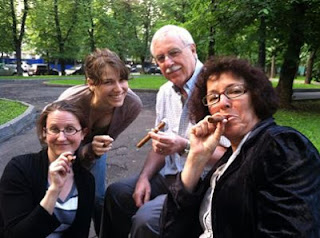 UPDATE: We had a little moment of excitement when an announcement began playing in Russian over the PA system in the dorms this evening - then it was repeated in English: there is a fire emergency, please proceed to the nearest exit.  This kept going over and over, so we put on shoes and headed down the stairs, where we met a few Russian students who insisted everything was okay.  It turns out that there was some small puff of smoke that set the system off... and the woman working the door - who is new this year - didn't know how to turn it off.  It went on way too long, but eventually we returned to our regularly scheduled chilling.  It was exciting for about 30 seconds though.

After class we had another non-show night, so the PhDs had a little conference in the park with JT.  On our way to find a park bench, JT insisted that we meander, walk slowly, take it all in – this was, of course, explicitly for my power-walking benefit.  He kept slowing us down and pulling is back and urging us to just appreciate where we are.  We had a very nice scholarly conversation about the shows we’ve seen and the work we’ve been doing in class – all over some beer, chips, salted fish (for those who like that kind of thing), and it was topped off with a few mini Cuban cigars that JT had bought for us.  It was pretty cute, the five of us sitting in the park with our beer and cigars and heady discourse.

And from there, I decided it was time to get some work done.  So naturally… I decided to blog.