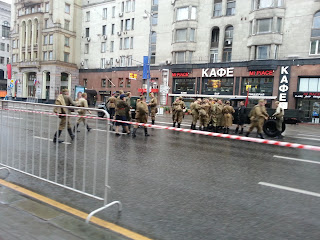 Today was a new experience for me, as it was the first time that I actually left the dorm on Russia Day.  Generally they cancel classes, and the city is just crowded with people celebrating what is essentially Russian Independence Day, but last year we were actually admonished to stay in our dorm and away from Red Square where there were likely to be anti-government demonstrations.  This year, however, we had classes – which meant leaving the cocoon.  On the way to school in the morning, they were in the process of setting up the floats for the Russia Day parade – so there were half-assembled floats in the middle of the street, and bus after bus of costumed performers waiting to be loaded on.  My personal favorites were a busload of Soviet-era soldiers, and two buses full of 18th century royalty.  The royalty was great – all decked out in the fancy costumes and wigs, just slumped up against bus windows and such.  Very amusing.
Then we had our second ballet class… which was painful, but probably mostly in a good way… I think… This was followed by singing class, which got a little out of hand time-wise, so the last two of us to work with Marina didn’t really get much time, but even in the ten minutes we got with her, it was wonderful.  Each summer I remember how happy it makes me to sing… and each summer I come home and the reality hits me of who has time and money for voice lessons?  <sigh>  One of these days, I’ll get back to them.
Then it was a quick lunch before our theatre history lecture from Anatoly – always a delight! The magical Russian theatre history elf dropped more awesome knowledge on us!
From there, things got pretty bitchin’, when we were led down the street to an exhibition hall where Dmitry Krymov – the director who created Auction and As You Like It, as well as a number of other amazing shows that I’ve seen in past years, and a number of others that I haven’t seen – has worked with his students to create an installation inspired by about sixteen of his performance pieces.  The title of the exhibit is “Камень. Ножницы. Бумага” (Rock. Scissors. Paper.), and the whole thing is conceived to feel like the inside of a workshop – the floors are layered with unfinished wood, there are toolboxes around, but there are also these amazing art pieces.  None of them cry out “look at this artifact from this play they made.”  The exhibits are standalone artworks in and of themselves…they just happen to share a sort of soulful connection with the shows they represent.  And they were all interactive and tactile and auditory and amazing... It was so freakin’ cool!  We were originally supposed to be escorted around by Krymov himself, but he got stuck in rehearsal, so instead his right-hand lady – Vera – showed us around.  She was so excited about and attached to the work, it was wonderful to hear her perspectives on this director about whom I have heard so much (since my professor is the foremost American researcher on his work).
From there, it was a brisk walk home through a much more crowded street than usual.  Though the barricades from the parade had all been cleared, there were definitely still extra people around.  Way too many for my taste!