Zizi the Chicken Saves the Day

Today was kind of a weird day from the get-go.  We started out with a shortened movement class because the entire staff of the MXAT school was having a giant meeting today.  And even though we had 30 minutes less than usual, we rocked big time!  Vladimir is taking us to very cool places in our partner work – we’re climbing all over each other and doing all kinds of crazy balancing!  It’s pretty damn cool, if I do say so myself… and I do. 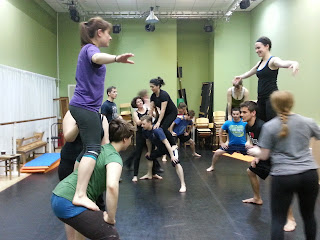 Then, because of the giant meeting, we had a three hour lunch…which for some people meant lounging or sightseeing or whatever.  For me, it meant booking it over to the Фоменко (Fomenko) Theatre to pick up tickets for productions of Носорог (Rhinoceros) and Три Сеcтри (Three Sisters) later in the month.  There were some hiccups, but I got to meet the woman I’ve been emailing, and I ended up with the right tickets for the right price, so I felt pretty good about the whole thing.  Then I headed back for the end of our lunch break and then our good ol’ acting class, which was really strong today.  Ilja pushed us hard on the concentration games… and we discovered that none of us knows any athletes’ names.  We also did a few more animal etudes – the highlight of which for me was Annie’s hen, who was both hilarious and tragic.  Delightful.
From there, things got complicated again.  Five of our group had tickets to see The Cherry Orchard at the MXAT for tonight at 7:00, so they had time to hang around, eat, do whatever the heck they did.  The other eleven of us, however, had to book it to the puppet theatre to see the 6:00 showing of Необыкновенный Концерт (Extraordinary Concert).  This is a show that opened in 1946… which is kind of mind-boggling.  It was charming, but I have to admit, it was a little boring.  There was a little poorly translated English in the program, so I could follow things from act to act, but it was basically a puppet variety show… the first act in particular was pretty boring.  The second act picked up with trained animals and magic and lion tamers and such.  Zizi the Chicken – who sang “pizzicato” along with her trainer’s accordion – was definitely the highlight for many of us.  And the lion named either Snickers or Sneakers was pretty awesome too.  The puppets were lovely, but the show was very much a product of another time.  I’m glad I saw it, but I’m also glad I didn’t pay any more for it than I did (400 rubles – or about $12).

After that, we just headed home, and that was that.  The rest of the evening was mostly spent with a lot of laughing with the group – it’s nice that, about a week and a half in, we still seem to find each other amusing.
Posted by Jen at 3:57 PM