So, Saturday morning started out with another wonderful installment of movement with the magical Vladimir.  This time, we started in on some of the acrobatic work he does with us.  It's pretty amazing how readily we just jump into standing on each other.  Or rather, how readily THEY jump into standing on each other.  This is the point when I fade back to become the photographer more than the participant.  But I'm still rockin' out Russian Dumpling, Scorpion, and I've almost got that shoulder stand! So I'm feeling pretty good. 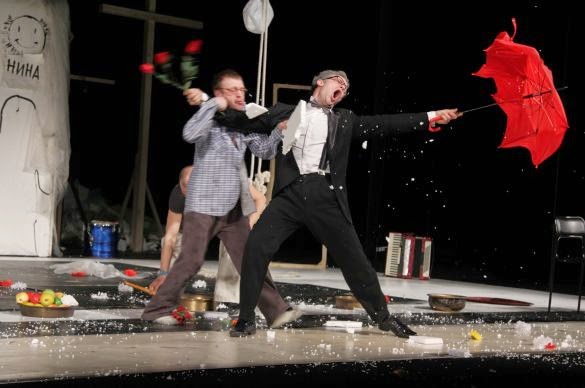 Acting class was a little short on Saturday because of an early curtain time for the show (which I'll get to in a moment).  So the group did a cute etude about being elves and a machine in Santa's factory.  We also learned that in Russia, the elves are not called elves, but midgets.  So that's a fun cultural fact for ya.  They did some work, and then spent the second part of the class discussing The Seagull with Sergei... and let me tell you: I love listening to Sergei talk about Chekhov.  He understands these scripts so deeply, and his insights are so playable and vivid... I could listen to him dissect these plays all damn day.  It's so effin' cool!  Then we had a brief dinner break before meeting up with the Butler group and heading over to the Satirikon for one of my favorite things in the world: their production of The Seagull.  Four and a half hours of non-stop emotional and intellectual energy just exploding out of every seam of every actor... it's unbelievable.  And I was seated right on the aisle (or rather, right in the aisle), so when Treplev came out into the aisle to watch the performance of his play, he came right over to me, blew fake snow on me, and just hovered over my shoulder for a while.  I may or may not have died a little from sheer happiness.  And even though I've seen this show four times... and even though I've taken copious notes on every production I've seen... I am still awed by every moment.  I still weep at the end.  I still soar along with the actors through this crazy exorcism of everything that this play has ever meant in its century or so of existence.  I just... I freaking love this show!

Then we headed home and I did a little skyping with my mom and my niece.  My niece, it turns out, was concerned that I was here by myself... without my kitties... so I had to assure her that I had my students with me.  She insisted that she see my students.  So I walked her around the dorm and she got to meet a couple of them... which was adorable. 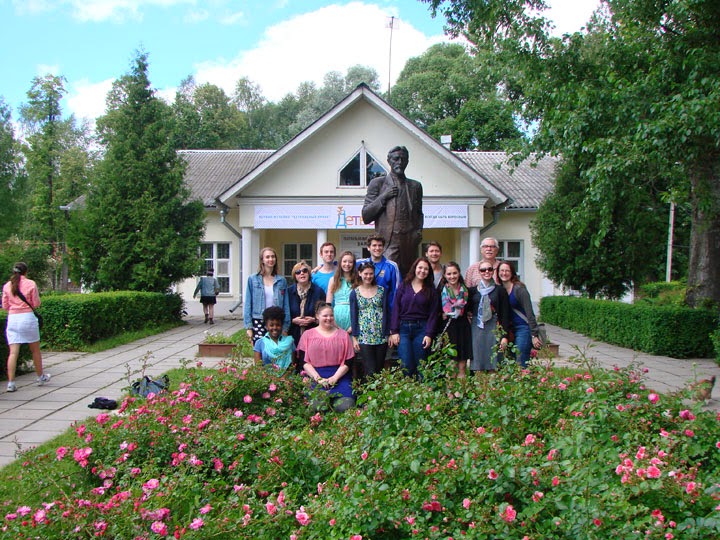 Sunday morning I got up early to head over to Starbucks for my weekly skype date with my Giant Ginger, which was delightful, as always.  Oh... so homesick!  Then I headed back to the dorm to met up with the group for our annual trip to Chekhov's estate in Melikhovo, a town about two hours south of Moscow.  Oddly, we ended up getting there early, so they took us on a brief sojourn to a holy spring that beautiful and crisp and super cold... it was a nice little side trip.  Then we hit the main attraction: Chekhov's home and grounds.  It was a lovely tour, a lovely day, everyone was super jazzed to get the feeling for Chekhov's world... it was delightful!

Once we arrived home, we had a couple of hours before our weekly potluck, then we did a little choreography for singing class tomorrow, and finally headed off to our respective rooms for some well earned quiet time!  Heading into the last week is always bittersweet... this year's group has been wonderful, and I have no doubt that they're going to rock out this final week and be all kinds of awesome, and we'll be sad to leave... but I've got a whole lot of life waiting for me at home, and I'm eager to get back to it!  So I'll treasure the next nine days... but I'll treasure what's coming next too!