Lady with the Lapdog

Today started out with movement class... and as sore as I was after the last one, I wasn't really sure how well that was going to go, but it ended up being wonderful, as is always the case. We got into shoulder stands, a pose lovingly called "Scorpion," balancing on chairs... it was delightful.

After lunch, we had an interesting acting class which involved a pretty hilarious improv game that went well enough that I really wished I could teach an improv class with this group.  Then, after a creepy spider etude, the group started into observation etudes, which are always difficult, but always an amazing learning opportunity.  It's hard enough creating the inner life of a stapler or a raccoon, but to have to do a full-fledged human being... that's much tougher. 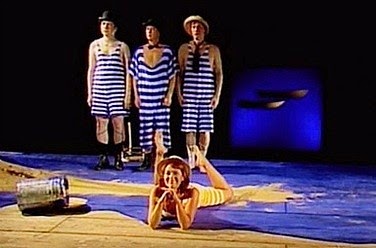 After class, the other grad student (Brandon) and I headed over to a theatre known as МТЮЗ for a production of Дама с Собачкой (The Lady with the Lap Dog).  It's based on a short story by good ol' Anton Chekhov.  I actually saw the production three years ago, so it was very cool to see it again.  The lady was actually a different actress this time (different from the one in the photo), but she was absolutely effervescent.  It's kind of a talky play, but it also is so simple, clear and theatrical in its story telling... it's just lovely.  The whole thing is performed on the balcony level of a much larger theatre space.  So the stage is actually on the front of the balcony, and actors readily hop off the edge into the vast space beyond (or rather, the balcony beneath them).  And they use the strange little space they have so very well!  The lighting is minimal - sometimes only one light would even be on at a time, yet it helped tell so much of the story.  And, when the scene shifted to an opera performance, they turned on the huge, beautiful light fixtures of the theatre proper, which was such a genius way to incorporate the space.  In addition to the two lovers, there were two sort of clown characters who brought props in and out, danced, commented on the action... did whatever was needed.  And they were wonderful.  The whole show really was.  And may I just say... it was pretty darn sexy, too... but without a single bit of nudity or even a single kiss.  In fact, there was hardly any actual physical contact.  But wow... the staging was all kinds of creative and evocative.

Afterwards, it was back to the dorm for a quiet night.  We don't really have many of those left... so I'm enjoying it.