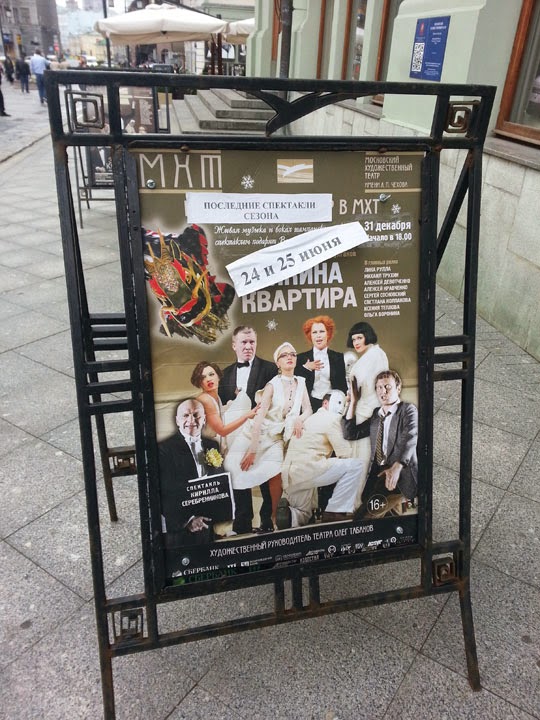 Well, yesterday was a pretty full day, with our last theatre history lecture with the incomparable Anatoly Smeliansky, and then acting class, in which the students presented their own 12 minute version of The Seagull... that they came up with in one day.  And it was pretty good, too!  So go them!  (I ran sound... because that seems to be my main function with their performances.)  Then, we gathered for our last show at the MXAT - Зойкина Квартира (Zoyka's Apartment).  It's this crazy story from 1920s Russia (just after the Revolution) of a woman named Zoya who opens a brothel under the guise of opening a seamstress school.  It's a musical - which is a lot of fun.  And on top of that, it is an amazing technological experience.  Between this show and Master and Margarita, it's as if the directors were actively trying to showcase the capabilities of the space... but they also managed to make all these crazy technical elements actually help tell the story!  In this show, the set was a giant rotating cube... there were huge projections... amazing costumes... and the set had a full ceiling, which totally changes what lighting they can use.  I have actually seen this production once before - two years ago - and I had no idea what was going on.  I mean, it was amazing, but sort of incomprehensible.  This time... I read the play before we went to see it... which completely changed the experience.  I knew just enough of the story and the language to really get some of the jokes, which was rewarding.  And it's always easier to watch a play when there is some modicum of understanding involved.  Plus, even though our seats were added into the house left aisle, I scooted us into the center when the show started, since there were empty seats... so we had a pretty great view!  All around, a very cool evening! 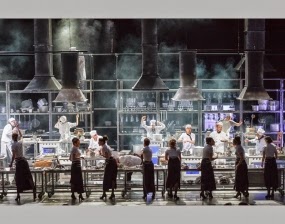 Today started out with our penultimate movement class... and I kind of rocked on the shoulder stand today, if I do say so myself... and I do!  Plus, I was joined by two of my kidlets in achieving Russian Dumpling!  Then I got zillions of pictures of different acrobatic things, which is super cool.  And for acting today, one of the students was ill, so I was pulled up to participate to even out the group, which also turned out to be a lot of fun.  Then we headed back to the Satirikon for our last show with them, a strange little piece called Кухня (Kitchen).  It's basically just the story of a group of people who work in a fancy restaurant - chefs and waitresses.  Mostly it was sort of impossible to understand, because not much really happens.  But it was fascinating to watch as an exercise in super detailed acting.  The set was a huge, fully loaded kitchen with what must have been hundreds of dishes and pots and pans (oh my!).  And no matter how real it looked... they actually didn't cook anything.  Everything they did was pantomimed... to perfection.  Apparently, all the actors had gone under cover at a local restaurant, training in the kitchen.  Only the manager knew that they were actors.  So they got the experience of preparing food... and man, was it amazing to watch!  I would have sworn they had the items they were preparing.  There was a guy who kept flipping and seasoning cutlets by whom I was totally transfixed.  There was chopping and cooking and serving and all sorts of kitchen behavior... but not a single real piece of food.  The first part ended with an amazing, stylized version of the lunch rush.  And there was a great sequence when the chefs were all fantasizing about what their lives could be like.  So, though it was sort of hard to follow, it was so freaking cool to watch!

The show was only an hour and a half, so we were home at a reasonable hour for once, giving folks some time to work on things for tomorrow... because tomorrow is the beginning of the end - our first "last day" with our singing and dance teachers.  It sneaks up on us every year!