This morning (June 17) started out without much fanfare.  Most of us headed out a bit early so that we could get some internet time at Starbucks before class, what with our dorm being without.  At home, when the internet goes down, it’s a bit of a pain, but I’ve got my 4G, I’ve got my phone… I’ve got other ways to contact people.  But here, wi-fi is all we have.  And without wi-fi… it’s a little bit frustrating and a little bit unsettling to be along on an island.  Apparently the person who is in charge of the wi-fi in the dorms was defending his final project today, so we’re hoping that went well for him, so that he’ll be in the mood to fix our wi-fi tomorrow.

For theatre history today, rather than the portrait gallery of the MXAT, we were shuttled up a few floors in a tiny elevator four people at a time, and we ended up holding class in a conference room that is part of the office of Oleg Tabakov, the artistic director of the Moscow Art Theatre, and a much beloved Russian film actor as well.  He’s kind of a big deal… and the room certainly bears that out.  The rich colors, fancy art, historical books, big leather chairs… it was pretty intimidating.  But it also ended up being kind of wonderfully intimate, as about 30 of us huddled around the table with Anatoly Smeliansky at the head, spinning yarns about Stanislavsky as if they were old pals.

After class, I had a little adventure with one of the students, as we went to a specialty orthotic store to buy her some arch supports in hopes of quelling some foot pain she’s been dealing with.  So… now that’s something I’ve done.  It was definitely easier than the late night urgent care trip last year, so I’ll take it.

Acting class was interesting today, as they started off with a cool, balletic etude about a snowman who fell in love with the sun.  Quite tragic, as you might imagine.  Then there was a fascinating storytelling exercise that wasn’t particularly successful, but was extremely illuminating.  This was followed up by a snake and a mouse, a sloth, a pelican, a cat, a baboon, a butterfly, and an army of fire ants. 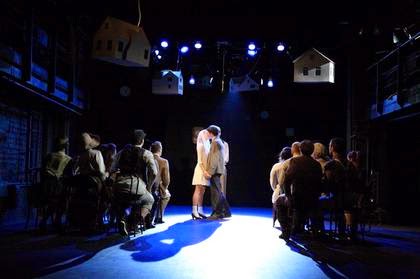 Then… came tonight’s show. And I have to say, it was really something.  Tonight we saw Наш Городок (Our Town).  It was particularly cool for several reasons.  First of all, the undergrad company did Our Town earlier this year, and four of the actors from that production are on the trip with us, not to mention the director – our fearless leader, JT.  Second, this production was directed by our deal Ilja, who is teaching most of our acting class this year.  And finally, this performance was the final performance that the fourth year class would be giving together – their very last one!  And, on top of all that, it was absolutely remarkable.  They took a quintessential American play (that usually runs just shy of three hours with two intermissions) and brought it to exuberant life on stage in less than two hours (with no intermission).  The acting was incredible, the company was utterly together, the precision of their pantomime along with the sounds that were used was all but unreal.  The cuts were great – they really made the play sail along.  And oh wow… did this show make us cry.  There we all were, sitting in the front row, hanging on every word (that we didn’t know, and yet completely knew) and weeping openly.  I know it puzzles the Russian actors that we can be so moved by a play without speaking the language, but between our familiarity with this script, and their excellent, invested and imaginative production… it was all we could do to pull ourselves together enough to walk home.

Of course, the walk home didn’t happen until after some of the students introduced themselves to some of the cast members and ended up getting the group invited to the class’s graduation party.  Ah, those outgoing American kids!

Then… well… it was a quiet evening at home… since internet is still just not a thing for us.

You know, when I was in college, I lived in Austria for a whole summer one year, and we didn’t have internet.  We had to go to internet cafes, if memory serves.  And I would call my parents collect once every other week or so.  What a difference a decade (and then some) makes.