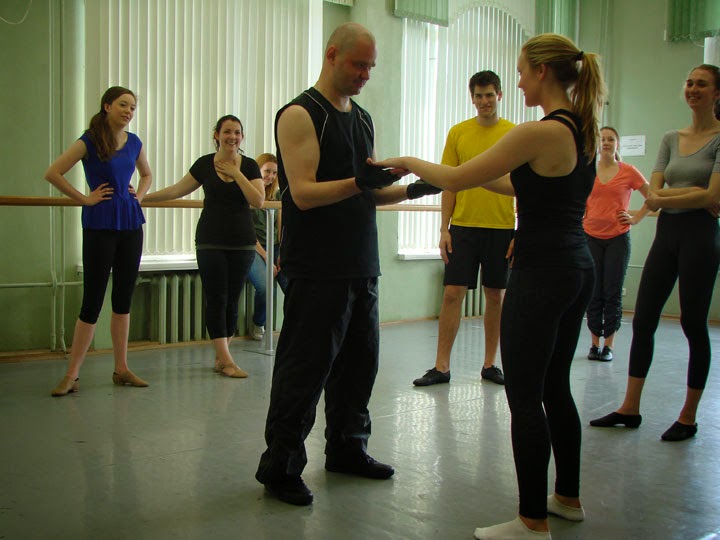 This morning was our first stage combat class, which is always a lot of fun.  The teacher is a fearless beast of a man who is just fascinating to watch.  He introduces every exercise with, "Next pleasure."  He had the group all over the place, doing all kinds of different activities - they were working very hard in there, for sure!  Every now and again, JT, the translator, and I had to relocate to avoid being run over by zealous high-fiving or some other such activity.  After class, I headed up to the Lenkom Theatre to pick up tickets for Marriage for some of us on Friday.  I was supposed to buy eight tickets.  She told me there were 5 for the price we wanted, and 3 for a price 2.5 times the price we wanted to pay.  I told her that was too much money for students, so I would just buy the five.  Then, lo and behold... three more cheaper tickets appeared!  So I felt pretty good about myself on that interaction.  We're in the absolute back rows of the balcony, but we're there!

Then I headed back down to school for a quick lunch before acting class... unfortunately, one of the students thought she had left her cell phone behind at the Starbucks near our dorm that morning, so rather than making her miss any of the class, I did the good den mother thing and made the journey there and back myself.  Thankfully, it turned out to be a successful journey, as the barista had her phone back in the office.  Huzzah!  I did manage to make it back for the second half of class, which largely involved everyone describing how they thought the world would end.  This was fascinating, hilarious, and a little depressing.

Back at the dorm for the night, I hung out quietly while the kiddos went out for dinner.  I had every intention of using that quiet time to my advantage - maybe doing some reading and writing and whatnot, but I'm still just the teensiest bit jet lagged... so I just ended up zonking out until they returned.  <sigh>  Then... well... I zonked out some more. Honestly, I'm getting concerned that, four times in, my blog is now getting a little boring.  The kiddos are always out running around exploring with every spare second they can find, while I just sort of hang out in the dorm, reading and wishing I were writing... I do need to make a point of heading out to a couple of places I haven't seen yet that I know I want to...but I also have to make a point of making some progress on that dissertation monster that keeps breathing down my neck.

Oh... but why the post title?  Well... today's activities were all so partner focused.  It was really neat to hear the continuity in lessons between stage combat and acting class.  The philosophies are so compatible.  I feel like, in the US, a lot of the time our training is so haphazard.  Whatever disparate things these people in this department like are what we'll talk about.  But here, there is such deliberate heritage.  Whether you are telling a painful story from your partner's childhood, or chasing your partner's hands around the room with your knees, the relationship between the partner is paramount.  It's why an audience leans forward in their seats to see what will happen next.  I really loved that little motif for the day.
Posted by Jen at 1:43 PM