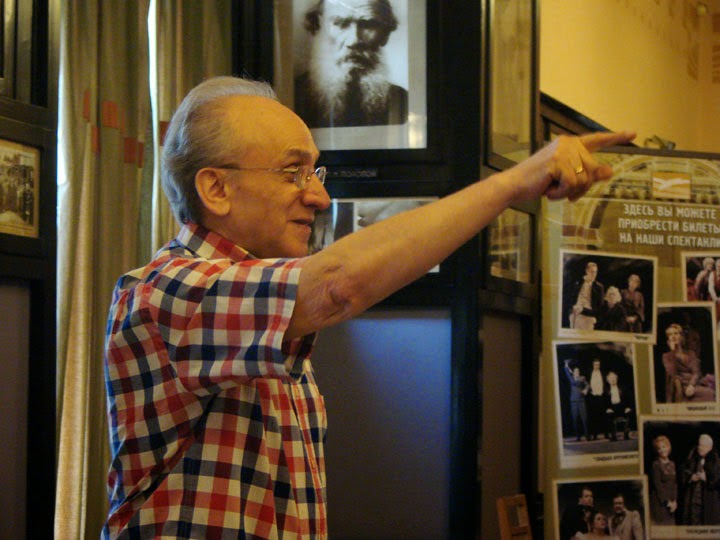 Today was sort of a light day, which felt good... and will feel good in retrospect as we head into the next week... which is going to be jam packed.  We started out with our first theatre history lecture with the delightful President of the MXAT Theatre School, Anatoly Smeliansky.  Seriously... magical theatre history elf!  I love this man!  And he always does his first lecture in the portrait gallery in the lobby of the MXAT... which is just gorgeous and magnificent.  He refers to it as the Pantheon of Russian Theatre.  And as he meandered through historical anecdotes, we all hung on his every word.  (Except, unfortunately, my phone, which somehow paused itself from recording 6 seconds in... so I didn't capture the lecture.  Boo.)

After that was a quick lunch during which I popped over to the administrative office to check on tickets for the students for Swan Lake next week.  While I was there, I chatted with the delightful Larissa and Lena in the office - a little Russian, a lot of English - and they invited me to have lunch with them next week!  I feel so special!

Then the group met to work on their first group etude, which is always a fun process to watch.  The etude itself actually ended up going pretty well, though it could definitely have been sped up a bit.  Still... an excellent first effort!  Go team!  And then came the first round of object etudes, which brought us a flip phone, a straw, a fan, a fire extinguisher, a carpet, a recording device, a flower, a lighter, and a balloon - all of which were super interesting.

After class everyone went their separate ways, since we didn't have a show.  I took a couple of minutes to chat with a young woman who had been observing our class.  It turns out (I think) that she is a student from Brasil who has been studying here since April.  So, if that information is correct, then I'm very proud of the two of us for muddling through it, since clearly neither of us spoke great Russian.

Then around 9:00 the group came back together for our potluck.  It was a lovely time, the group was super talkative and insightful about the time they're spending here, and there was lots of yummy food (largely carbs and cheese based... so... you know... I was happy), and then we scattered for the night.  All things considered, it was a quiet day, but a good day!  And now, we have a show every night until at least the 17th.

Email ThisBlogThis!Share to TwitterShare to FacebookShare to Pinterest
Labels: Adventures in Dissertation-ville