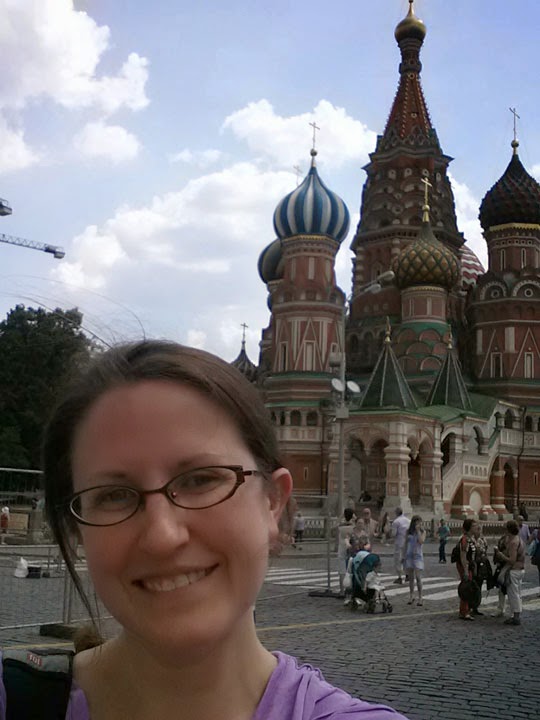 But before we got there, we had a sort of strange day.  We arrived at 10:00am for our Stage Combat class... but apparently our teacher got his wires crossed (something you overlook in a fearless beast of a man), so our class was cancelled.  The thing is, we didn't have class again until 2:30... so that meant we had about four hours to kill.  I'm not sure what everyone else did... I mostly did some reading and some journaling, strolled down to Red Square for a few just to pop by and say howdy to ol' Basil, and generally enjoyed the quiet time.  I also spent some time with our awesome MXAT support staff getting some ticket things figured out.  So that's cool.  Acting this afternoon turned out to be a really lovely, moving day.  I can't really do justice to all the magical things that the students did in class today, but it made me really proud and happy to see them commit to the work and each other the way they did.  It was a super special day.  And that's really all I can say about that.

Then, while five folks headed back to the dorm, eight of us hoofed it up to the Lenkom Theatre where we saw Женитьба (Marriage).  This is a production I saw two years ago, and though I don't love the leading lady (she's a little long in the tooth for the role, and a little hammy for my taste, but when you're related to the head of the theatre, well...), the show itself is quite a spectacle.  The use of automation in stages over here is very impressive.  And what may well be most impressive is that the automation is used effectively to progress the plot.  Madness, I know!  The action of the show sort of revolves around this big wardrobe - which rises sideways out of the floor at the top of the show (while a couch revolves from under the stage with an actor on it), and later moves about, flies, etc.  It's pretty impressive.  But there's one point where a whole wall is whirling around like a windmill, mirroring the whirlwind in which Podkolyosin (approximate transliteration) finds himself... it's pretty wow-worthy.  It's definitely a step of from our Twelfth Night the other night... and I just can't even express how much of a step up tomorrow night is going to be!  I love knowing what's in store!  It's so much fun!  Though, we also have a few shows that I don't know, and that is fun too.  I love the chance to discover  these ridiculously awesome pieces!

Sadly... I forgot to wear my pedometer today.  I'm thinking it was 3.75ish miles.  So... we'll say it was that.  I'm really hoping all this walking and eating less will translate to fitting back into my dress for my friend's wedding in July.  See... this trip is inspiring AND practical!