This morning the group had Stage Combat first thing... and then nothing until acting at 3:00.  And, since I don't participate in stage combat, I just stayed home, slept in a bit, took a shower, worked on edits for my dissertation, finished phase one of an editing project for a friend that I've been working on, and made lunch.  The me time was highly beneficial.  It was a super productive morning.  And I would very much like to get addicted to that kind of productivity.  That might make this whole dissertation thing slightly less terrifying.

Anyway, after my awesome me time, I headed down to class, where the group came up with an amazing etude about aliens... seriously... this was creative and cohesive and cool... I think they really rocked this one out.  And they did good work in the rest of class too.  I'm getting the feeling that this last week of class is going to be full of really exciting work.  I'm looking forward to observing it! 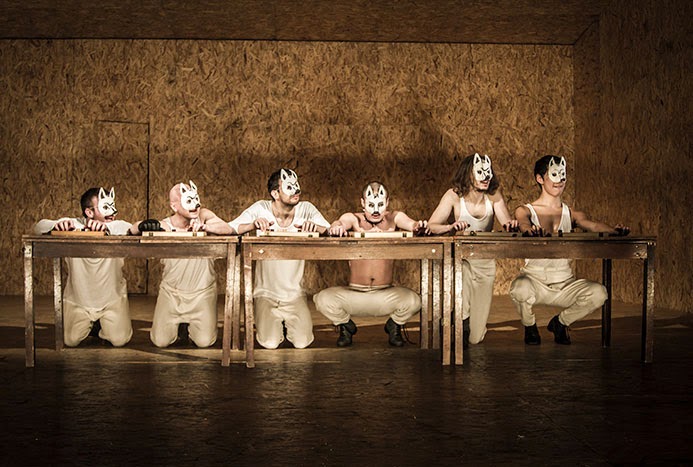 After class, we met up and headed off to the Gogol Center for their production of Мёртвые ду́ши (Dead Souls).  This is a fairly new theatre, and the show itself is listed as a premiere (which can mean a lot of different things in the Russian theatre system, but at the very least, it's the newest work by a very cool director).  The theatre itself has an amazing, open, creative, inviting vibe that just made me want to play.  There are images of and quotes by famous theatre folks all over the place, the exposed brick is awesome, the actual performance space is somehow cavernous and intimate at the same time... it's sort of perfect.  And one of the most interesting differences we noted while we were there was that all the ticket staff were young people - probably in their 20s.  At every other theatre, those jobs are held almost exclusively by little old ladies.  But here, everyone was hip and young and energetic.  It was interesting.  And the play itself... I hardly know what to say about it.  It was a fascinating, imaginative, and undeniably alive performance of what is, frankly, a pretty boring play on the surface.  But this was definitely not boring.  Oh!  And the interesting twist was that this performance featured English supertitles, which I thought was going to be awesome, and in some ways it was.  But the fact is, I have gotten so accustomed to watching shows in Russian and making my own meaning out of the acting and visuals, that I found the desire to take my eyes off the stage to read the words a little distracting.  I probably missed a lot by doing that.  But the play probably would have been fairly opaque without them (even considering the sort of adorable typos, strange translations and technical difficulties).  All in all, the show wasn't up there on my list of favorite shows or anything, but it was wildly creative, I was totally transfixed... and I seriously want to live at the Gogol Center.

From there, it was back to the homestead... and off to sleep before Vladimir has his way with us in the morning.

Email ThisBlogThis!Share to TwitterShare to FacebookShare to Pinterest
Labels: Adventures in Dissertation-ville, Adventures in Russia