Okay... first things first: Let's get real about how sore I am after movement yesterday.  By the Hammer of Thor, my muscles are grouchy!

Today was probably the least eventful Russia Day of the four I've experienced...and they're rarely all that interesting to begin with.  Class was cancelled, and the ladies in the dorm wouldn't do our linen laundry, and most of us ended up napping for most of the day.  It was pretty chill.  I probably never would have even left the dorm if we hadn't had a show to see - and what a show. 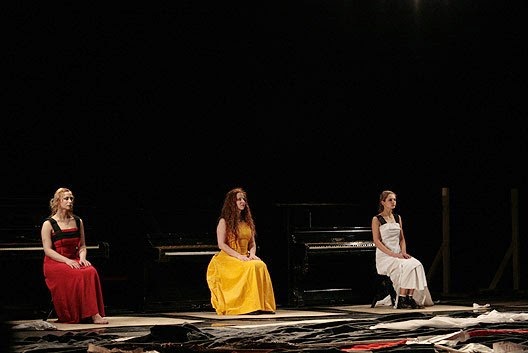 I've seen the Satirikon Theatre's production of King Lear twice before.  Last year I skipped it to go watch a terrible production of Coriolanus.  But this year, I was back!  This show opened in 2006, but the place was packed.  And, for the first time, we got to do third bell seating.  In Moscow, they open up the doors to students and pensioners after the third bell, and then it's just every man for himself.  Elbows flying, people climbing over each other to get to that empty seat in the middle of the row (and the Satirikon is not big on leg room), chairs in the aisles... it was quite an experience.  But, as nuts as it was, they allowed time for it.  They didn't set us free in there at 6:59 and then just start at 7:00.  They waited until the ushers had managed to seat everyone.  Me - I was sitting in a chair in the eighth row of the house left aisle, which actually ended up being a great seat.  At intermission I was able to shift over to a real chair, and honestly, I think the view was actually a little better from my aisle perch (though my butt was happier, so I think it all came out even).  The show itself is much stronger than Othello.  It is more polished, has a clear through line in its interest in father/child relationships, and the images that he chooses to tell the story are much more effective.  Butusov can be brilliant, but he can also suffer from a lack of self-editing.  When he's on... he's on.  And in Lear, I would say that he is ON.

On this trip, I have found myself paying a lot of attention to the lighting in the shows we're seeing.  I suppose it's just a manifestation of missing the Giant Ginger so much.  I keep trying to look for the things that would be exciting for him.  And I do think that Lear has a particularly effective lighting design.  There are a lot of steep angles and small areas - revealing only what is needed at any given moment.  And the music!  Oh!  Music is so much a part of all of the shows we have seen so far this month.  And (soapbox) with the stupid Tony Awards dropping sound design as a category, I found myself extremely aware of what the sound was doing to me tonight.  Without that music, it would have been a different, and much less visceral show.  I mean... just... wow.  And Russian theatres are not afraid to TURN IT UP.  You feel the music in your bones.  One of the things we talked about at our potluck the other night was that US theatre sees a script as a sort of finished product, with the actors, directors, and designers putting in their two cents worth to make the pop up book of that product come to life (obviously, I'm way over simplifying here), but Russian theatre sees the script as a place to start.  It is as alive and flexible as any other part of the production.  And it's pretty exciting to see the ways they shape the stories they want to tell out of the stories that we think we already know.